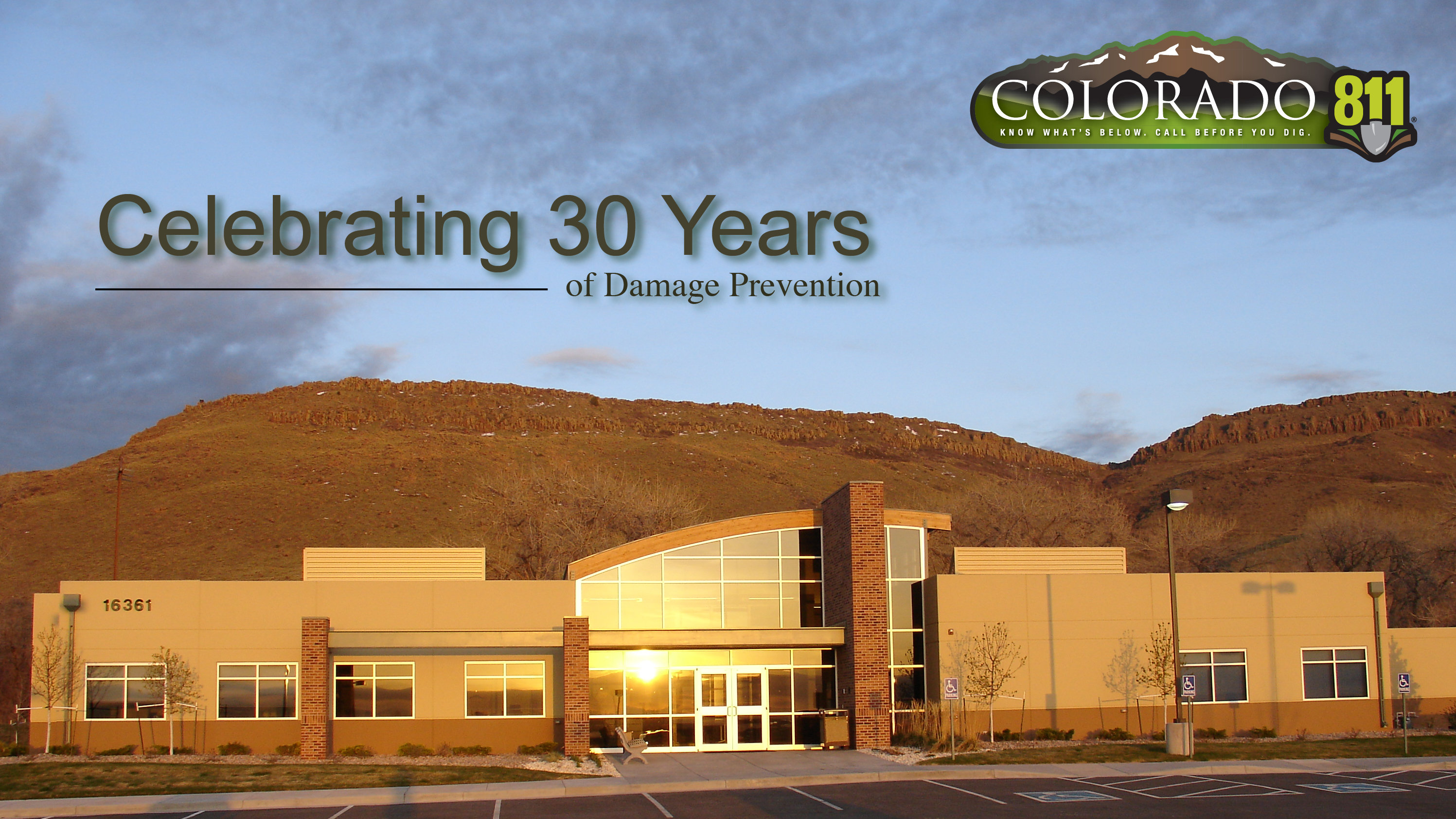 Colorado 811 is celebrating its 30th year anniversary and we wish to express a heartfelt appreciation to our members, the excavating community, Colorado residents and all other industry stakeholders. Over the past 30 years our industry has evolved in a way we could only hope for.

Thank you to all our stakeholders who have united with Colorado 811 to improve safety and damage prevention to keep our state protected from underground utility damages. We plan to continue our work as an industry leader by utilizing technology and partnerships and providing outstanding customer service. 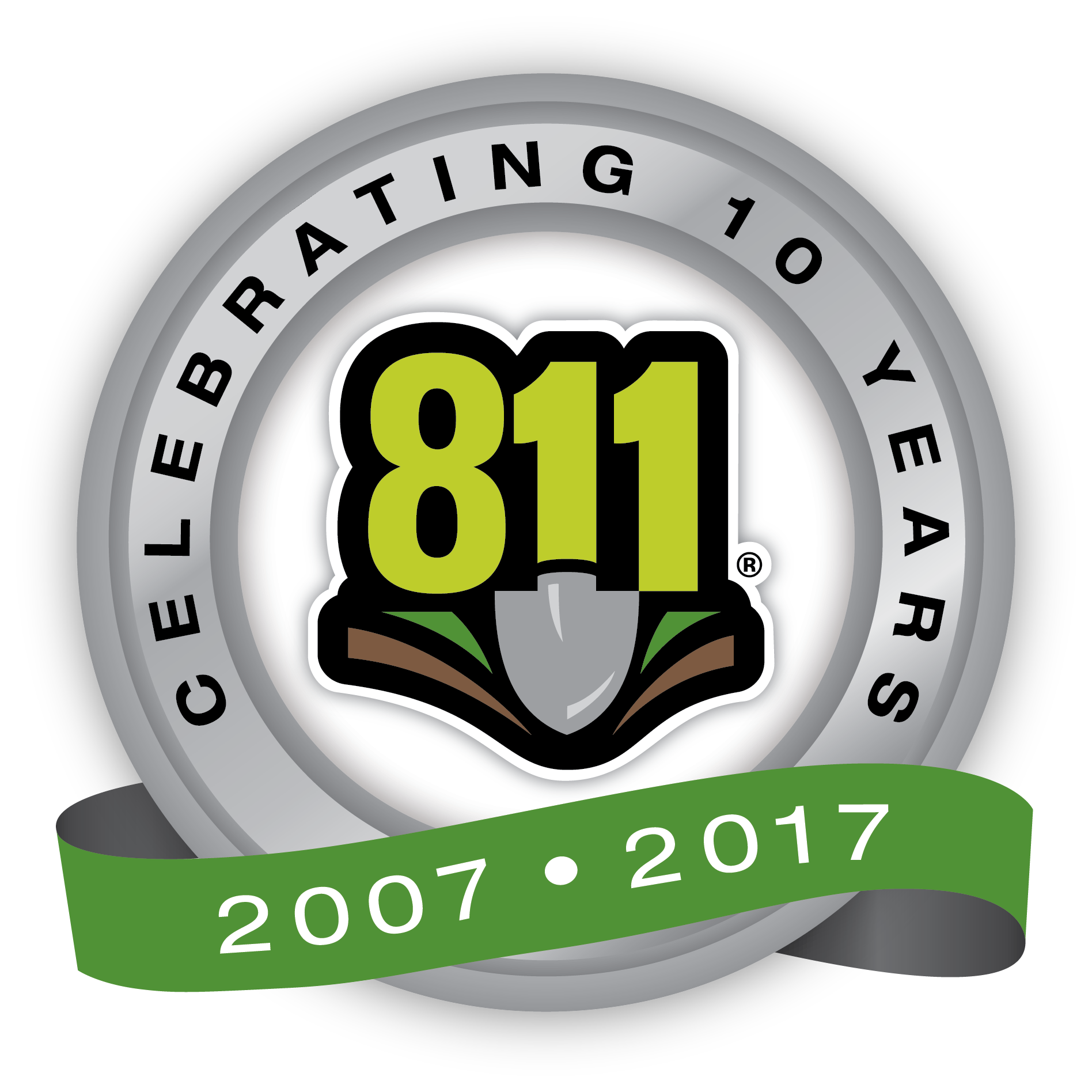 To celebrate ten years of 811 as the national phone number designated by the Federal Communications Commission to connect homeowners and professional excavators to their local One-Call centers, the Common Ground Alliance (CGA) and industry stakeholders have planned various campaigns for 2017. One campaign is the 811 video Challenge, watch CO811’s acceptance video here. The full 811 video challenge will be aired at the CGA Excavation Safety Conference and Expo in March. 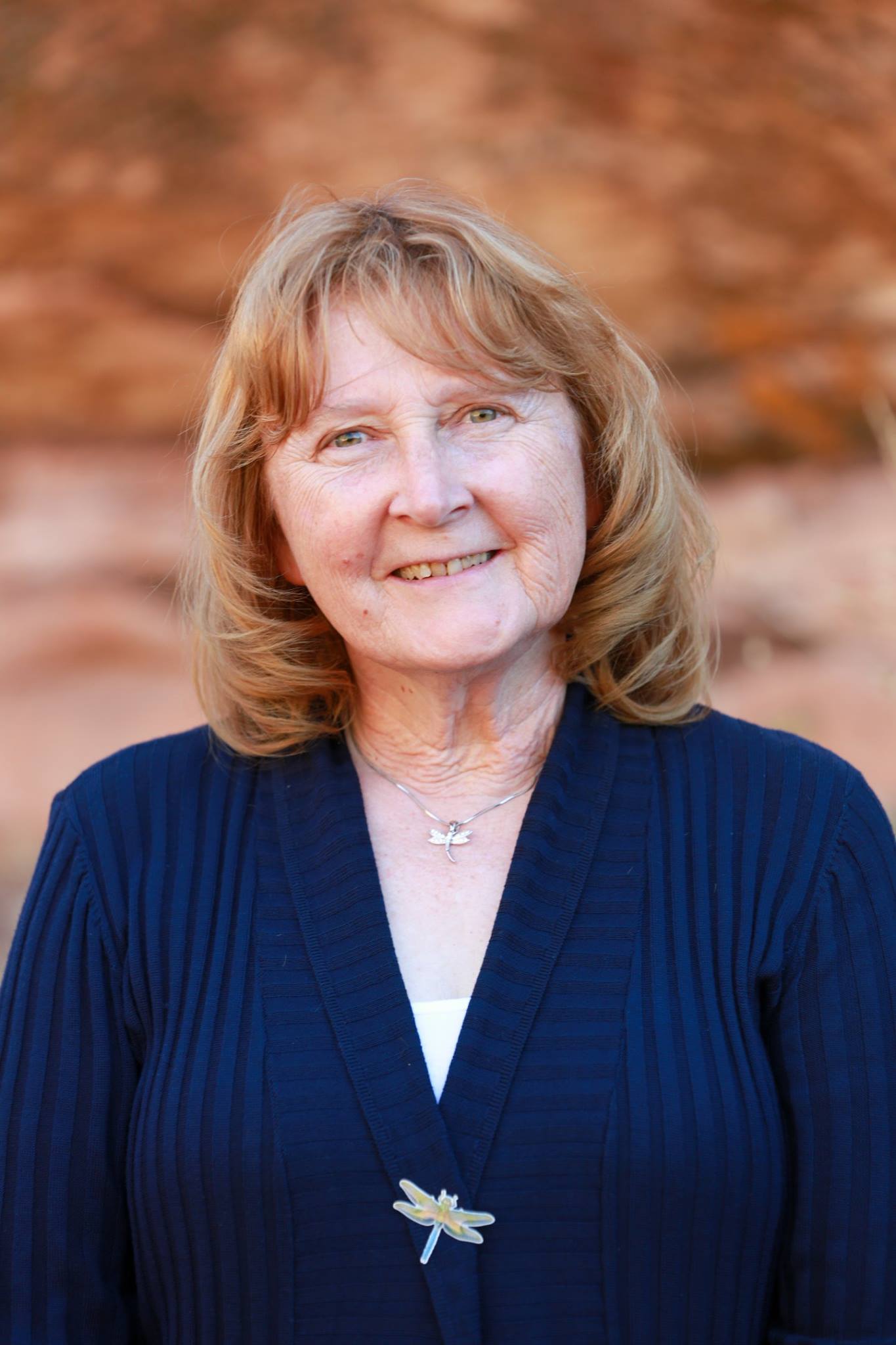 Sandy Samuelson is a true damage prevention pioneer, she became involved with damage prevention over 26 years ago, when she worked for United Power. Colorado 811 had been established for just over four years when she was offered a position that included managing member databases and mapping.

During Sandy’s time with Colorado 811 she grew the membership from 32 to 1,578. She also helped develop, implement and promote Positive Response and Web TMS. Sandy made it her goal when working with members, 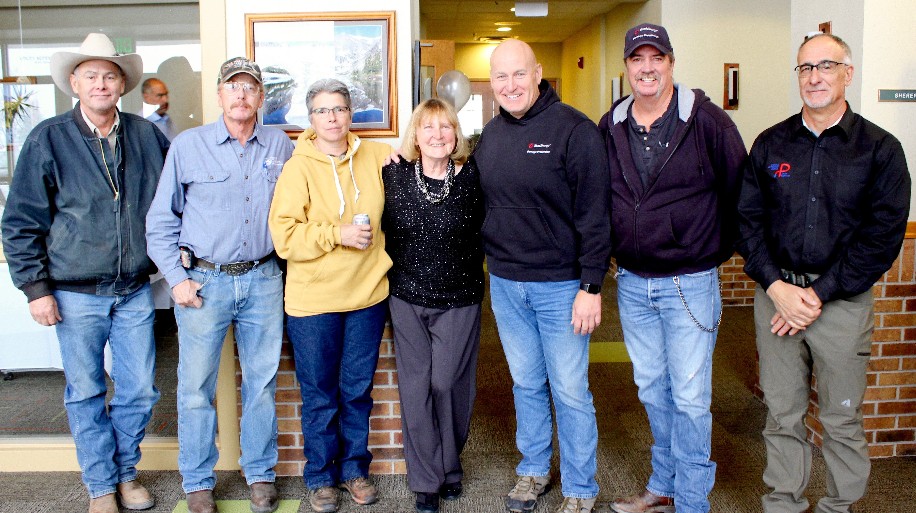 excavators and co-workers to build genuine relationships. Whether it was baking for a special occasion, or making homemade holiday cards, she went above and beyond her job to make everyone around her feel special.

Congratulations to Sandy on her remarkable career with Colorado 811!

The Expedite program was developed for CO811’s Excavator Membership. Its purpose is to allow excavator members to view all tickets that were called into 811 or processed online by one or all employees in a central place.

Expedite also allows the excavator to update a ticket with a click of a button as well as view positive responses on a ticket. Expedite holds 30 days worth of data, which can be quickly and easily accessed.

Rodeo Clown, JJ Harrison doesn’t clown around when it comes to digging 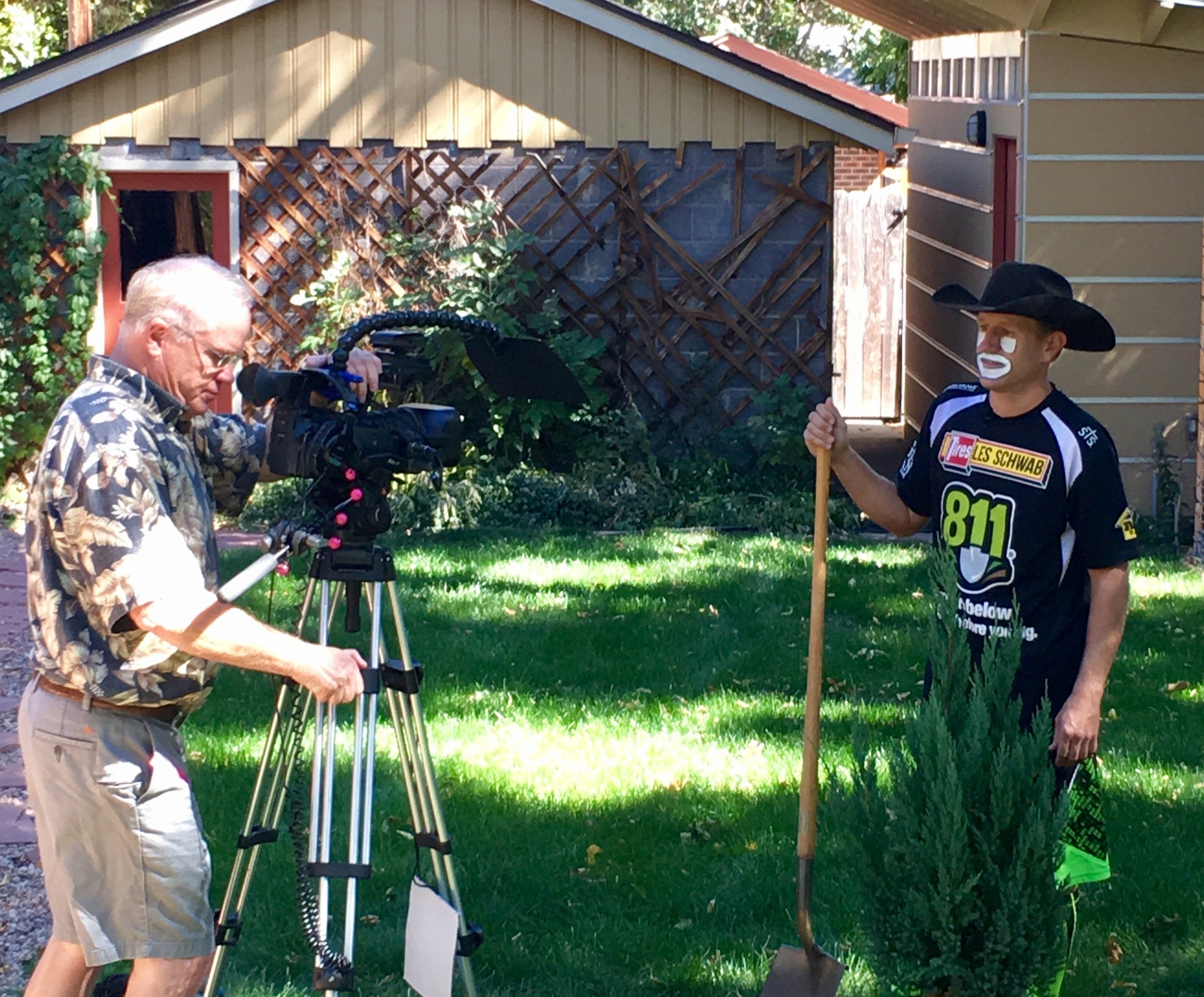 Rodeo clown, JJ Harrison has been involved with 811 since 2012 when he partnered with the Pipeline Association for Public Awareness. Since 2012 he has become a representative and true supporter of the 811/Call Before You Dig message.

Because of his commitment to the industry, CO811 has partnered with JJ for their 2017 Colorado Broadcasters Association NCSA (Non-Commercial Supporting Announcement) campaign. The NCSA program is for nonprofits who have a community serving message to share across the state of Colorado. CO811’s 2017 TV and radio commercials will air in English and Spanish across 38 TV stations and 197 radio stations from mid-March through September. View the 2017 commercial here.

Board of Director Spotlight: Ryan Echer 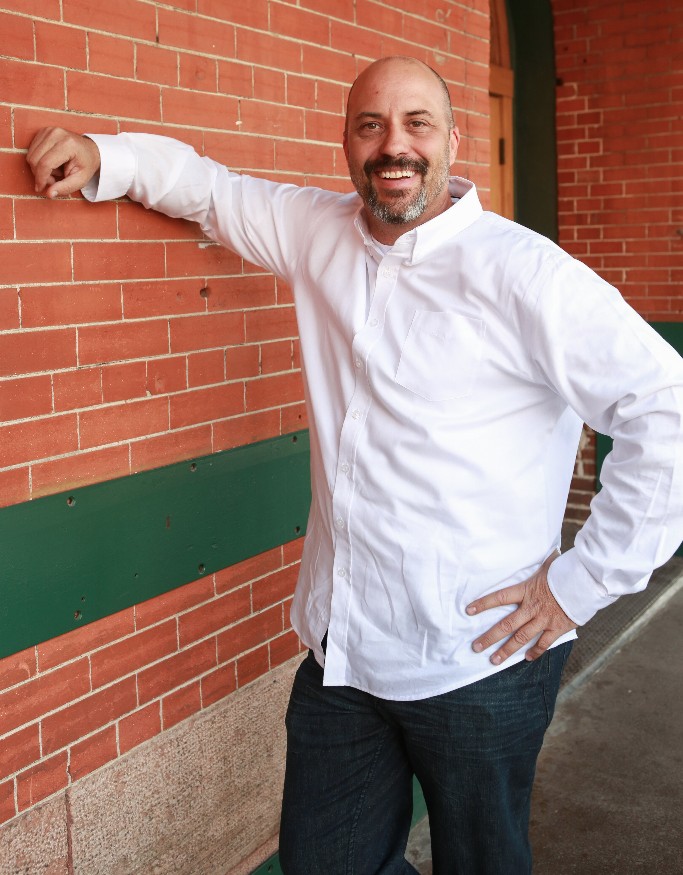 How did you get involved with Damage Prevention?
I started being involved in Damage Prevention in 2005. I had been promoted into a job at the time that Damage Prevention was a high priority. I instantly realized how important Damage Prevention was to the industry as well as the public.  If we can save one life or prevent one injury by promoting safe digging practices and 811, we have successfully accomplished what we are striving for.What is your vision for damage prevention in the future?
The vision I foresee in a one word is ZERO!
Zero people getting injured or worse.
Zero impacts that impact the operations of all the utility companies and their customers.I also envision a mindset within the excavation community where picking up the phone and calling in for locates is as normal as putting your seatbelt on while getting into a vehicle.  While Colorado 811 has been a leader in education for Damage Prevention we can still do better.  At CO811 we will always continue to push for Zero!

Tell us a fun fact about yourself.
I love playing golf, hunting and spending time with my family. I hit my first and only “hole in one” last year. I would like to say it was skill, but anyone who has golfed with me would strongly disagree.  I also enjoy being a volunteer coach for my son’s football team.

How did you get started working at Colorado 811?
A staffing company referred me to Colorado 811 five years ago when their Administrative Assistant position was available. JD, Jose and Marty were scrambling to fill the position given the late notice of their previous assistant. Talk about being in the right place at the right time!What is your favorite part about your role in damage prevention?
My favorite role in the damage prevention industry is having the ability to assist everyone within and outside of the office. I work with so many wonderful people, including our staff members, board members and the general public. Bringing everyone together and accommodating the needs of others is very rewarding.What interests do you have outside of work?